The Red Barn. This was located just North of Logan Avenue on Keewatin Street. Before it was named and painted red. The Red Barn was known throughout the city for its lively times. Several well known country and western performers were seen there including Del Genthon and his popular CJRC Grainbelters, Wilf Carter and Hank Snow, who reputedly rode his horse around the inside stage. The Red Barn in its final years became a three floor Bingo Hall until its demise in 1980s. A license was issued on June 13th 1938 to Mr. B. A. Patterson of Patterson’s Stables to conduct dances on his property at Keewatin and Logan Avenues. At the time a letter to the Manitoba Tax Commission from the Village Administrator stated “ We understand that a charge of 35 cents is made for admission. A good-sized crowd in attendance every Saturday night. Certain conditions had to be made to the building due to its popularity and crowded conditions. In 1947 charges were made of discrimination against a coloured person. There were inevitable fights and brawls that accompany any busy dance serving liquor.
The Brooklands Speedway – scenery 1950s, Brooklands racer on motorcycle
(located to the northwest of Brooklnads off Oak Point Highway,near Selkirk Avenue, was well known in Western Canada. In 1963 one Stock car race meet saw 4,640 spectators.)
Train – in museum, of an early train 1890.
Stevenson Airfield – plane flying above to symbolize Captain Frederick Joseph Stevenson who became one of Canada’s first bush pilots in 1926.
Brooklands Voluntary Fire Department – 1965 faces put onto a photo taken in 1952.
The Red School, (Krawchyk School Today)
The Ukrainian Orthodox Church in Brooklands
Privy – outhouse is a current photograph, mimicking one in photograph.
In 1957 sanitary sewers and watermains were installed on the remaining streets in Brooklands. Resident water meters were installed for $28.00
Burton Cummings -1960’s – the Early Years
Ferlin Husky – 1964
Beauty Queen on a Ford Thunderbird convertible – carnival in 1970
(Brooklands used to have an annual carnival organised by the Community Club and other groups in the area. At one time it was one of the largest in the Winnipeg area. Carnival Queen Debbie Kohler is shown in 1970)
Residential Houses -Ada Street water pails in 1942 (in the picture, Mr Wowchuck and Mr. Krontiuk are fetching water from a nearby manual water pump staton. There is a wooden bridge on the left side. I will use only the architecture in this photo but not the people.
Mrs. Tataryn and Bill Jr. on Elgin Street (Mom and baby crossing the street)
Canadian Bank of Commerce on Logan – 1906
dancing from 1950’s

Owned and operated by the same family since 1981, the Red Barn in Bradenton, FL, combines a traditional flea market, plaza shops, food courts and open-air farmers markets in a 145,000 sq.ft area. Enjoy 80,000 sq. Of air-conditioned indoor shopping, fresh produce, entertainment and a. RED BARN BINGO HALL IS AT RISK OF CLOSING ITS DOORS! For the past 30 years, The Charles H. Best Diabetes Centre has depended on funds raised from our Red Barn bingo in order to keep our doors open. Without our bingo proceeds, we would be losing approximately $30,000 per year!

Ludo - click to play online. Ludo is board game played between friends and family. The game is played between 2 to 4 players, the objective of the game is pretty straightforward, each player gets 4 tokens, and these tokens must make a full turn of the board and then make it to the finish line. Have a great time. Ludo is a game that can be played with two or four players. In the two-player version of the game, only half the board is used; the areas that would normally correspond to the third and fourth players are greyed out, and pieces will skip these regions when they would normally travel between them. 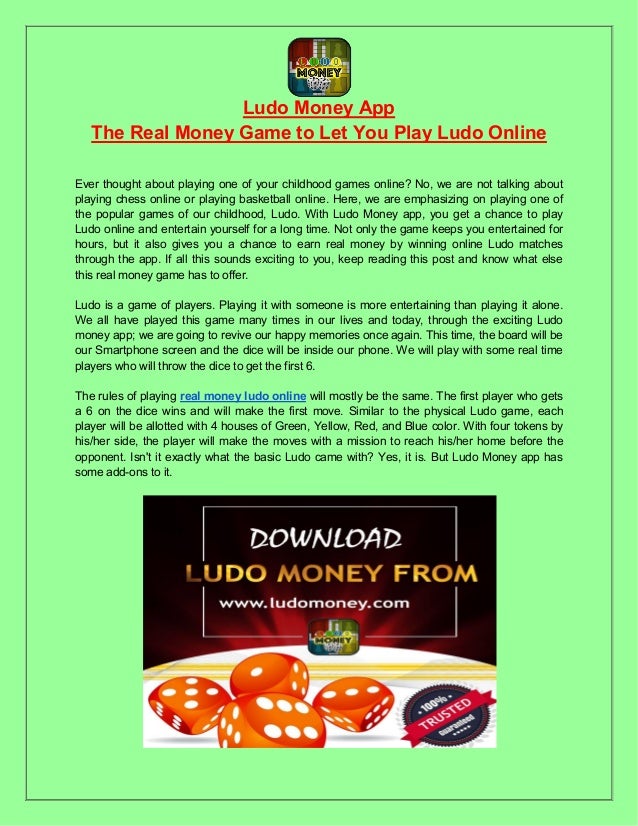 Ludo money brings you the platform to play real money ludo against real players. Ludo Money has over 1 lacs players, which makes it more thrilling. It is the first of its kind where ludo with Snake & Ladder can be played with Real Money. Ludo money also has its exclusive app for Android. Play your favourite indoor game, ‘LUDO’ online on Ludo Real Money against online players, and start earning real money! About Ludo Real Money. Ludo Real money brings to you the perfect platform to play real money ludo against real players. Use our user interface as the ideal environment to showcase your skills. Ludo Empire is a project of Fabzen Technologies Private Limited.Ludo Empire is the online version of the most played board game - Ludo, with a great twist that you can play this game online for fun, and along with that, if you win, you will earn real cash.