What ten Ohio State vs Alabama College Football Playoff National Championship predictions appear to be the best bets and picks?

It’s big-time vs. big-time, and we all want and need a really, really good college football game to close out the 2020 season.

Here are the ten best-looking prop bets, predictions, and big picks for tonight’s showdown. Warning … there’s a crossing of the streams here.

Value means as much or more here as anything else – so there will be a few contradictions. Let these confirm, deny, or help you in some way go with your already held beliefs.

10. First score of the game an Alabama TD

Of course the first score might be a weird safety, or some quirky special teams or defensive touchdown, but that’s unlikely.

Alabama has managed to score the first in 11 of its 12 games, and in the one time it didn’t – the win over Ole Miss – its first points came on a touchdown. Three times, Bama scored first on a field goal, but the overwhelming number is on the side of scoring a touchdown first.

Clemson scored a touchdown first to open up the scoring against Ohio State in the Rose Bowl, and Northwestern got the first touchdown – but the Buckeyes scored first on a field goal – in the Big Ten Championship.

Nebraska opened up the season with a touchdown drive on the Buckeye D.

Go Bama. Roll the first touchdown as the first score of the game. 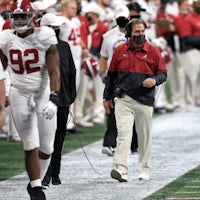 Jones having an awful day is the one thing no one seems to be thinking about, and obviously this is a big number to hit no matter what, but how many times has he thrown for over 365 yards this year?

Now as many as you might think – six of the 12. However, that Trevor Lawrence guy hit Ohio State for 400 and Indiana’s Michael Penix cranked up 491. Even ol’ Rutgers went for 232.

There’s no real value at -110, but if you like Bama, you’re probably going to with some big stat pick like this anyway.

There’s far better value on this at Ohio State on the money line and with each team scoring 30 or more – more on that later – but if you think Ohio State is going to win, it’s probably going to be some sort of an offensive show both ways. And if it’s not, 59.5 isn’t asking for the world, here.

Remember, the Clemson obliteration of Bama in Santa Clara was 44-16.

There’s no value, but if you have an inkling …

The Ohio State run defense is terrific. It held Clemson to just 44 yards on the ground, gave up 44 to Penn State, too, and Indiana cranked up one fewer yard than you did – it netted -1 in the 42-35 loss – back in November.

Robinson has gone over 19.5 yards eight times, but he didn’t get there against Florida in the SEC Championship or against Notre Dame. All it takes, though, is one big dash, and if this somehow turns into any sort of Bama blowout, he’ll get the ball late.

Going back to the first item on the list at No. 10. Alabama has scored first in 11 of the 12 games, and it scored the first touchdown in nine of the 12. Out of those nine, how many games did Najee Harris score the first TD on the first score of the contest?

Sermon caught four passes for 61 yards in the CFP Semifinal against Clemson. That included a long of 34. Prior to that game, Sermon had 34 yards on eight catches for the season.

Ohio State used a check-down option way more in the Clemson game plan than it had in any other situation in recent memory. Three-quarters of the Buckeyes’ throws to backs are essentially the modern equivalent of outside runs.

The transfer from Oklahoma didn’t immediately gel as part of the Buckeyes offense but Sermon broke through with a program-record 331-yard game against Northwestern in the Big Ten Championship Game Dec. 19. He rambled for 193 yards in the Sugar Bowl.

Sermon got 60 carries over those two games, he’s running behind a top-shelf offensive line, and OSU is going to want to engineer methodical 10-play drives more so than normal in an effort to keep Alabama’s circus offense off the field.

QB Justin Fields took a hard hit against Clemson, and may not be 100% — either to engineer all-passing drives or to be as active in the read-option run game.

This tag is pretty fair for an Ohio State offense that was rolling Jan. 1. In fact, the Buckeyes have rolled over this total in six of their seven games. Yes, this is Alabama, and there is some risk, but the +105 price is a nice reward.

The Ryan Day offense/QB coaching and the emergence of Sermon — together with an offensive line finding its best gear of late — make for some value.

Ruckert has 12 catches on the season; Farrell has five. Both scored against Clemson in the Sugar Bowl (Ruckert caught two TD passes), and the tight end position is a key in this game on both sides of the ball.

The Buckeyes run a lot of plays out of two-tight-end sets and Fields is a quarterback who gets comfortable with certain receivers in spurts. Tag both Ruckert and Farrell as value plays in the first-touchdown prop.

It’s a play on some chaos perhaps — on a couple or three late-drive turnovers and a couple of red-zone defensive stops. It is after all the title game for the 2020 season: this would be a very 2020 combo to hit on.

Want action on any of these props? Sign up and bet at BetMGM. If you’re looking for more sports betting picks and tips, visit SportsbookWire.com. Please gamble responsibly.