Lufthansa Cargo flight LH8402, a Boeing 777-F, returned to land at Frankfurt International Airport (FRA), Germany after the cockpit crew noticed unreliable airspeed indicator readings.
Prior to the departure on October 10, 2020, various scheduled maintenance tasks had been performed on the aircraft. One work package included the flushing of the connection lines of the static system
For the flight from Frankfurt to Shanghai, China, there were 4 pilots on board. The co-pilot was Pilot Flying, while the commander assumed the role of Pilot Monitoring. The airplane took off from runway 25C at 09:21 local time with an indicated speed of 204 kt and a ground speed of 191 kt.
Approximately 15 seconds later, a windshear warning was recorded on the FDR and CVR. The indicated speed at this time was 176 kt and the ground speed was 199 kt. The copilot then requested, 'Max Thrust.' This was acknowledged by the commander. He reported the windshear warning to ATC and added: '[..] we now have five-zero knots tailwind [..]'. The bank slowly reduced from 11° to 7°. After another 10 seconds or so, the commander asked the copilot to increase the bank angle.
The copilot replied that she did not want to go below the indicated speed. The indicated speed at this time was 178 kt. The commander noted that the tailwind had increased to 80 kt.
Both expressed surprise that it was not possible to reach the required speed at full thrust, even though the longitudinal inclination was already unusually low. After the indicated tailwind had increased to 100 kt, the commander concluded, '[..] well, that seems very strange to me, I would say that it's unreliable airspeed.'
As a result, the commander and the copilot agreed to switch their roles as pilot monitoring and pilot flying, and the commander took over the controls.
Shortly thereafter, the copilot noted that the Integrated Standby Flight Display indicated a speed of 300 kt. A ground speed of 300 kt was also recorded on the FDR at this time.
After the crew unanimously concluded that the airspeeds shown on the two primary flight displays must be unreliable values, the commander decided to declare an emergency at 09:23 and to stabilize the aircraft's attitude by making longitudinal pitch angle changes.
At this time, the aircraft was approximately 8 NM southwest of the airport at an altitude of approximately 6,000 ft.
There was coordination between the crew and controllers as the flight progressed. The course took the aircraft back to Frankfurt Airport and from there in a northeasterly direction over the VOR Metro for about 50 NM. At 09:40, in consultation with ATC, the crew began dumping fuel to reduce the mass of the aircraft to the maximum allowable landing mass. Approximately 5 minutes later, the aircraft turned to a heading of approximately 250° and maintained this heading for 55 NM. At 10:02, the aircraft turned to approximately 210°. Fuel dumping was completed at 10:11. The aircraft was then guided by ATC to the ILS approach to runway 07C at Frankfurt Airport. It touched down on the runway at 10:23 and then taxied to a parking position accompanied by the airport fire department.
After landing, it was found that the sensors of the left and right static systems were not connected.
During maintenance before the incident flight the pneumatic lines of the static system were disconnected and flushed with dry air. The lines were then supposed to be reconnected to the system.
To ensure proper functioning of the pitot-static system, a leak test and a system test were then scheduled. This work was signed off the corresponding work cards as having been carried out without any problems.
The investigation is ongoing.
Sources:
BFU20-0887-5X
Preliminary report (in German): https://www.bfu-web.de/DE/Publikationen/Bulletins/2020/Bulletin2020-10.pdf?__blob=publicationFile

The Boeing 777F shares several features with the -200LR variant introduced in 2006, including its airframe, engines, and fuel capacity. This freighter offers a range of 4,970 nmi (9,200 km) while hauling a maximum payload of 224,900 lb (112 tons), similar to the capacity of the Boeing 747-200F. This range may be extended beyond 5,000 nmi with reduced cargo weight, making it ideal for cross-country, intercontinental, and global cargo charters.

The 777F offered improved operations & economics compared to older freighters such as the Boeing 747-200F, McDonnell Douglas MD-10, and McDonnell Douglas MD-11F, and quickly became one of the best-selling cargo airliners on the market. Since its first delivery in 2009 to Air France, more than 180 have entered service spread across 2 dozen customers worldwide, with 50 orders unfulfilled as of spring 2020. 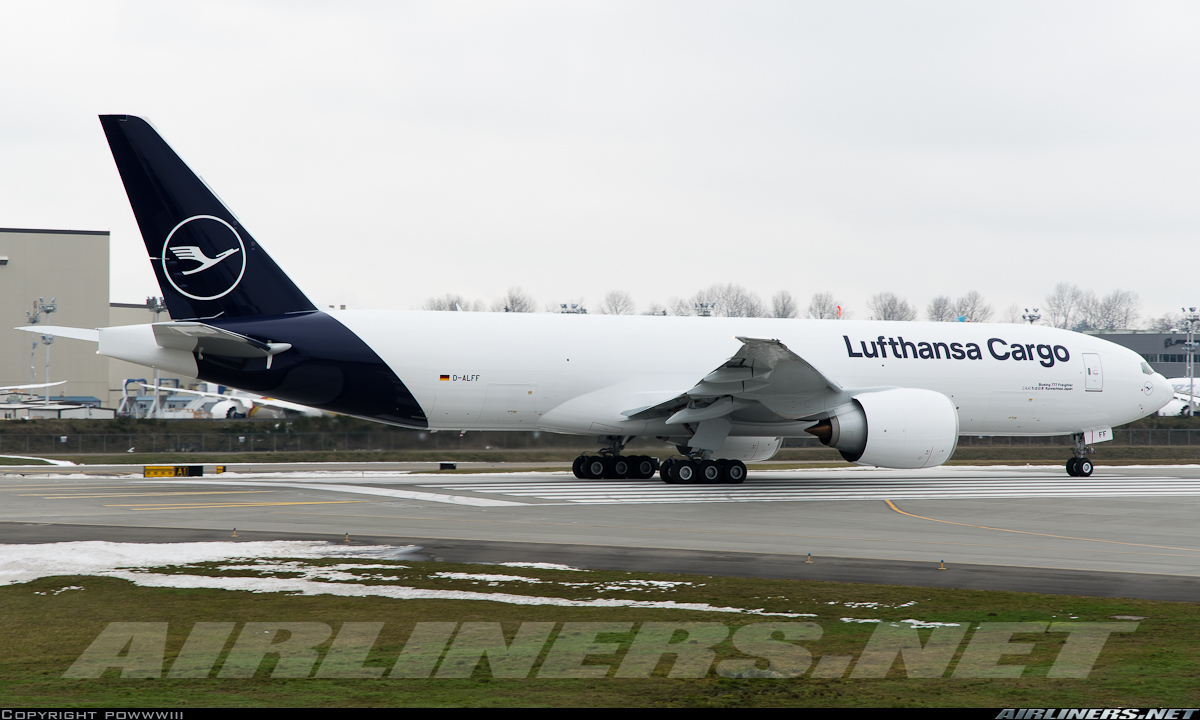 The loading doors for the 777F include the following, all listed in width x height measurements:

* Specifications are based on common models and may vary based on model, variant, modifications, and other factors. Please call or email us with the dimensions and payload of your cargo. Pictures are for example only. The age, color, interior layout, hourly rates, specifications, dimensions may all vary between aircraft. All images copyrighted and provided courtesy of Boeing unless noted otherwise.